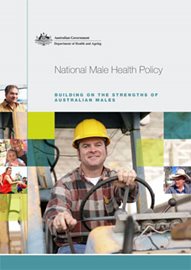 Australia continued to demonstrate its health leadership with the announcement as only the second country worldwide to implement a National Male Health Policy. The policy document pack begins with a discussion of male health issues and the public consultations conducted in its development.

The consultations and an extensive review of the literature, led to the following underpinning assumptions:

Six priority areas are then laid out for action. These are to promote: