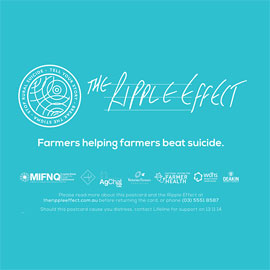 The Ripple Effect is part of beyondblue's STRIDE Project. It investigates what works to reduce self-stigma and perceived stigma among males from the farming community ages 30-64 years, who have either lost someone to suicide, attempted suicide, had thoughts of suicide, have cared for someone who has attempted suicide, or have been affected by suicide in some way.

Around 2000 Australians per year die by suicide, and many of them are from the farming community. This new online intervention from beyondblue and Movember can help eliminate the stigma around suicide and reduce the number of suicides on farms.

The Ripple effect is a way to reach out to farmers and start conversations about the experiences and effects of suicide in the farming community. Farmers are invited to share their personal stories of suicide with other farmers in the form of handwritten postcards. The messages from the postcards are then collected and shared on the Ripple Effect website

. Farmers can learn from other farmers and make positive changes to their own health and well-being.

There are a number of ways to help spread the Ripple Effect:

The Ripple Effect is funded by beyondblue with donations from the Movember Foundation. It is a partnership between the National Centre for Farmer Health (NCFH), Deakin University, Victorian Farmers’ Federation, AgChatOZ, Sandpit, Western District Health Service and Mental Illness Fellowship North Queensland.