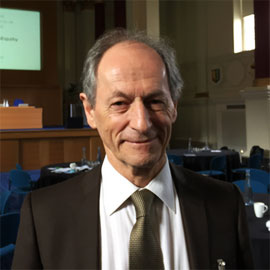 Sir Michael Marmot and Ryan Meili, family physician at the West Side Community Clinic in Saskatoon discuss the Social Determinants of Health and the evidence that the SDOH are getting more widely known among the population.

There's a debate and criticism around the term "Social Determinants of Health". To some the term feels incomplete, and it should be socioeconomic, socio-political etc. Sir Michael states that understanding the meaning of this term is what is crucial. What people worry about in their lives will affect and influence their health, factors like: housing, security, jobs, neighbourhoods etc.

Sir Michael feels that the role of physicians is not only to cure the sick, but to find out the underlying causes for illness and address the conditions that made them sick. Prevention of illness must be the focus to making people, communities and populations well, namely addressing the social determinants of illness. Doctors can incorporate this concept in their day-to-day practice if they are provided with tools to address them, such as getting appropriate training and support from partners in the community, or find out what's available to assist patients with their social circumstances. Simply handing out medication is not enough, but there's a need to deal with the real problem.

In order to get to the causes of the causes Sir Michael is looking at the conditions in which people are born, grow, live, work and age and sees the impact it has on people's health and the evidence for that. Not caring about people's living conditions and turning a blind eye is unacceptable.

We want affordable housing, we want good neighbourhoods, we want good schools, where our kids can go and flourish...And all those things are practical to health...

Sir Michael uses stories to communicate and engage with the public. He spends a lot of time looking at evidence and statistical data, and adding a story about triumph over adversity -things getting better - have a big impact because they are inspiring, and the evidence shows that you are making a difference.

available in Australia in October 2015.

Sir Michael Gideon Marmot, FBA, FMedSci, FRCP is Professor of Epidemiology and Public Health at University College London, and has for the past 30 years led a research group on health inequalities.

He is engaged in research on the social determinants of health and leads the English Longitudinal Study of Ageing (ELSA). He is also the Chair of the Department of Health Scientific Reference Group making efforts to deal with health inequalities, and Chair of the commission on Social Determinants of Health, as well as Vice President of the Academia Europaea.

Sir Michael was knighted in 2000 by Her Majesty the Queen for services to Epiemiology and understanding health inequalities. Sir Michael has also won awards in Epidemiology and Health Services Research, and is an honorary fellow of the British Academy. (WHO)