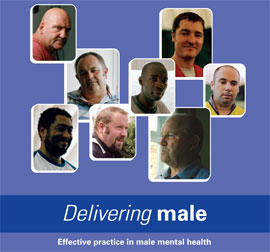 Delivering Male was commissioned by the National Mental Health Development Unit, and written and published as a partnership between the Men’s Health Forum and Mind.

"Male friendship groups may have a particular part to play here, as may men prepared to talk about their personal experience of mental health problems..."

The publication is divided into seven sections described as follows:

Gender is perhaps the most fundamental determinant of an individual’s sense of self. Ensuring that mental health service users are treated as individuals will therefore greatly increase the likelihood that their gendered needs as men (or women) are taken into account. If all service users are treated as individuals that should also lead to a greater recognition of the shared needs and experiences of groups and communities in general.

The existing moves towards greater personalisation of care and support (for example direct payments and personal budgets) are already giving some people with diagnosed mental health problems greater control over the way their support needs are met. This approach is to be welcomed and has the potential to contribute significantly to the better recognition of male mental health needs.

Inter-agency working in the early years

Many of the attitudes and beliefs that underpin people’s mental health behaviours are established in childhood – arguably during early childhood in particular. There is much more that could be done to support boys during childhood, especially those boys whose circumstances may increase their potential lifetime vulnerability to mental health difficulties and may reduce their capacity for seeking help.

Supporting the development of good mental health is not currently a shared objective for health, education and social service providers in any organised way. There is significant scope to prioritise the development of happy, well-adjusted children, and a very strong case to be made for taking the gendered needs of boys into particular account.

Few dispute that mental ill health is much more stigmatised than most forms of physical ill health. The damaging experience of stigma is commonly reported by mental health service users of both sexes. There has been little work to examine whether stigma affects men and women in different ways and/or in different degree.

Nor is there much detailed knowledge about whether prejudicial beliefs among the general public are more marked in relation to one sex or the other. We believe that it is at least possible that, in general, men may feel stigma more strongly than women, and that public attitudes may be more prejudiced against men with mental health problems than women. A greater understanding of the relationship between stigma and gender is needed.

The evidence suggests that men tend to under-use mental health services. There is probably no single explanation for why this should be. Structural reasons probably play a part, as probably do stigma and “traditional” male attitudes, which can make the acknowledgement of vulnerability extremely difficult for many men.

It is probable that a more sophisticated and nuanced approach to the promotion and delivery of services could improve male uptake. Men who find help-seeking difficult are not going to change in the short term – but mental health services can.

The role of third parties

We make the point in several places, that third parties may have a very particular role in encouraging men to seek help for mental health problems. It is possible to argue that the focus should be on moving men towards taking greater responsibility for their own health but other people, particularly life partners, are likely to remain a crucial element in the decision-making process for many individual men.

Because even married men tend to have fewer, and less intimate, social and family contacts than women, there may also be a place for other people who are in contact with a man in mental distress to support him in the process of seeking help. Male friendship groups may have a particular part to play here, as may men prepared to talk about their personal experience of mental health problems. There may be ways to facilitate and support the role of these third parties.

Men in mental distress often exhibit difficulties in other areas of their life and functioning. Alcohol and drug misuse – which may have been used as a coping mechanism – are common. Relationship problems, social disengagement, offending behaviour, and difficulties with work (chronic unemployment or work-related stress) also occur.

“Whole-life” problems need whole-life solutions. Joined-up approaches which include the involvement of social care, employment, and housing providers may be of particular value for men, who sometimes lack supportive networks of their own.

Professional training and an improved knowledge-base

Professional training is an important element in making progress on all equality issues. Training in relation to the most important issues in male mental health may be particularly useful, given the range of the issues that have been identified. Beyond developing practitioner expertise however, we believe that there is a good case to be made for the development of a much greater professional and academic knowledge base. There is little history of the dissemination of good practice, and the academic literature is sparse.

At the very least we would encourage the professional mental health bodies to develop an internal focus on male mental health. We would also like to see a national focus on the issue, for example in the establishment of a inter-disciplinary network with a conference or seminar programme. Ultimately, perhaps an academic centre for research on the issue might be established.