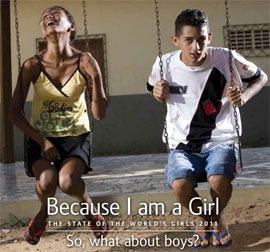 Promoting gender-equality should start at a young age, according to Plan International. This resource provides an overview of the principles behind engaging boys and girls in gender equality.

"A father's role is crucially important. How he treats his wife and daughters will limit or enhance their potential and choices in life. But it will make a difference to his sons too..."

This document provides a report in programs that seek to address issues of gender equality for young girls and boys with an emphasis on the role of a positive approach to creating gender respect. The campaign is part of Plan International's focus on health and wellbeing of girls that recognises the role of boys in supporting equality.

The report provides information and case studies of programs that are engaging boys and men in promoting gender equality for girls and women. By encouraging understanding and awareness of the kinds of contexts and systems that might create issues of inequality, it is intended that boys will learn actions that take a more equality-focused approach to female counterparts.

Although this resource takes examples from internationally, its lessons could hold useful lessons for practitioners in Australia.

Its emphasis on some of the angles around what is expected of boys in terms of cultural norms on masculinity, power, providership and other actions that can impact on women's and girls' lives are of use when designing ways to promote better respect for both genders. It is arguable that many of the tenets of gender equality that focus on girls could also have direct benefits on boys if understood and implemented appropriately.