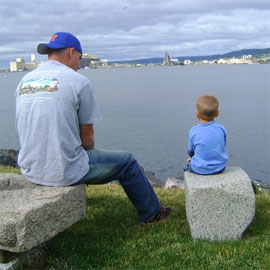 This study examines American stay-at-home dads and their families. These couples have made a joint, conscious decision that dad should stay at home and raise the children, allowing Mum to focus on her career. In this research 31 dads were interviewed about why they became stay-at-home fathers and how it benefited them and their families, as well as the challenges they faced in their role such as social isolation, dealing with stigma and adjusting to life as the primary carer.

"My wife surprised me recently with business cards that say "at-home-dad". And you know it's very much who I am and who I want to be. Absolutely I would say that it is my identity."

) . More and more fathers are choosing to put family first and stay home with the kids while the mother is the breadwinner. Key reasons include:

Good parenting is just as important to men as women, and many men strive to share parenting responsibilities equally with their partner. It is becoming more common for dads to stay at home raising their children with the shift from maternity leave to parental leave, and it is becoming more socially acceptable than a generation ago. The Advertiser (2013)

Research conducted by The Boston College Center For Work & Family "The New Dad: Right At Home (2012)" reveals that the traditional roles of fathers in American society is changing from working fathers to fathers striving to better integrate their professional and parental roles.

This research was conducted to better understand fathers who have chosen to be stay-at-home-dads, to see why they left the workforce, how they contributed to their families, and what allowed them to successfully navigate this role. According to the U.S. Census Bureau the percentage of stay-at-home dads rose from 1.6% (81 000) in 2001 to 3.4% (176 000) in 2011.

Men Who Choose To Be An At-Home Dad

Factors that have a negative impact on fathers' abilities to be present and hands-on caregivers include inflexible and long working hours and workplace cultures that ignore workers' family lives and define work as the most important aspect of people's lives. In these demanding work environments men may choose to stay home with their children instead. In this study there appeared to be three primary reasons why men chose to become the primary caregivers:

Making The Decision To Become An At-Home-Dad

In this study 31 interviews were conducted with men who had specifically chosen to be a stay-at-home-dad. This decision was most commonly jointly reached by the couples in view of their financial circumstances and their shared values on how the children should be raised and by whom. In most situations the spouses' earnings were greater than the fathers' and in a few cases the fathers' earnings did not cover the costs of childcare. In many of the interviews both spouses felt that one parent should be at home with the children.

The positive impacts that at-home fathering contributed to according to the fathers themselves in these interviews were that they had:

Most of the men in the study felt that their families thrived as a result of having them at home full-time, and the spouses were on the whole very positive about their arrangements, saying they felt blessed, grateful and fortunate that one of the parents could be at home full-time, that it gave them peace of mind and that the children were better off because of his decision to stay at home. Also, the dads' decision to stay home enabled their spouses to pursue their careers without the limitations many other mothers may encounter.

Most of the new at-home dads felt that going from an active work environment with social interaction to a much more isolated environment taking care of a small child or children was a big culture shock requiring some adjustment. Once adjusted to the role most of the men felt comfortable with their role and accepted it. This research supported previous studies finding that at-home fathers felt socially isolated, and that there was a lack of an effective social network. Common challenges to establishing social networks were:

At-Home Dads And Their Professional Careers

Being a stay-at-home dad may greatly disrupt the dads' careers, and many of the fathers in the study were unsure what their next career steps would be. Fathers who disliked their jobs and had little desire to return, saw this break as an opportunity to forge a new direction in the future, and those that wanted to return to work wished to find work that enabled them to spend significant amounts of time with their children, even if it would inhibit their opportunities for career advancements.

This study shows that at-home-dads are very good parents. The dads viewed themselves as good parents, as confirmed by their spouses. They were:

These men and their spouses had made a conscious decision that the fathers should dedicate themselves to the full-time care of their children for an often indefinite length of time. They took on this role - not based on gender but considering the needs of their spouses and children. These men, and others like them are forging a new path of what it means to be a successful father showing different ways to live a meaningful life.